I warned many times in my earlier pieces that wherever Russian bloodthirsty war correspondents appear, including Alexander Kots, Semyon Pegov, Dmitry Steshin, Daria Aslamova, Yuri Kotenok, and others, local residents need to stay away from them and be prepared for bloody provocations.

These people are not war correspondents, not journalists – they are war criminals. While in combat zones, not only to they spread fake news, they also act as fire spotters, as well as take part in POW interrogations and staged killings of civilians and prisoners.

Literally a month ago, in my article “Russian invaders shoot Ukrainian prisoners for the sake of staged reports (18+),” I told how captured Ukrainian soldiers were shot dead precisely for Semyon Pegov’s report about an alleged attempt by Mariupol defenders to break through the siege.

And now it turns out that a local resident was killed in Mariupol for yet another pseudo-sentimental junk by Pegov.

On March 23, Semyon Pegov met in the temporarily occupied part of Mariupol a local resident who was reading a book on the ruins of what once used to be his house. As always, Pegov drew up a propaganda report that appealed to his regularly fooled audience. In turn, his handlers with the Russian GRU military intelligence saw a promising development in this story, ultimately murdering this man on his Birthday. 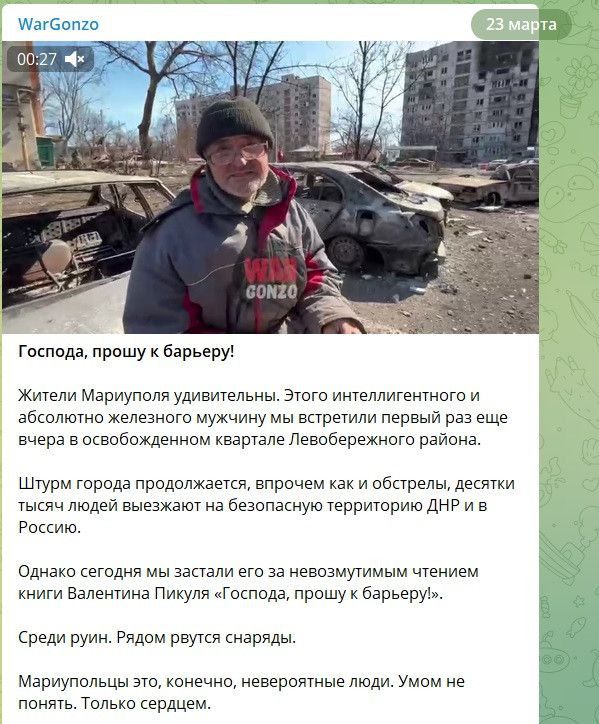 So on April 26, Pegov comes up with another tearful piece claiming that the “man with a book” was insidiously killed by a sniper… It remains unclear how a Ukrainian sniper could kill anyone on April 26 in a city that, according to defense minister Sergei Shoigu’s report to Vladimir Putin of April 21, is completely controlled by the Russian armed forces… Seriously? 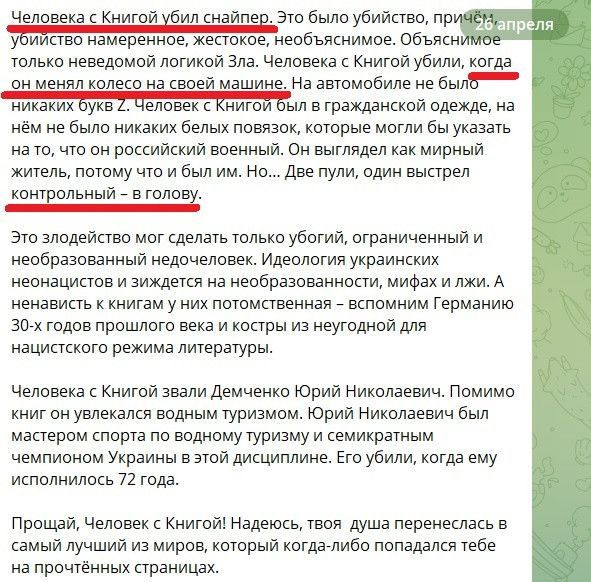 But there’s more to this story… There was also a kill shot to the victim’s head. Do you get it? A sniper kills the man, then approaches the body and makes a kill shot just to make sure the job is done…

And how can I not recall the staging dissected in my piece “Russian invaders shoot Ukrainian prisoners for the sake of staged reports (18+).” In that case, Ukrainian POWs captured by the Russians were shot in the back of the head. 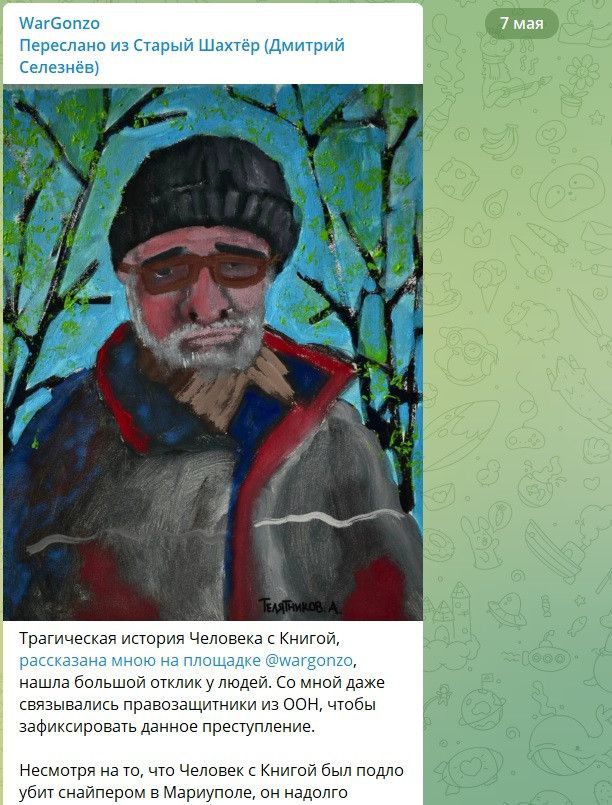 And now, Semyon Pegov speaks about the Mariupol civilian’s bad luck after he met and reported that initial story. He writes tearful posts, while Russian propagandists use the image of the killed man as an exposure of “inhumanity” of the Armed Forces of Ukraine and confirmation that Russia must continue to “de-Nazify” and “demilitarize” Ukraine.

This is all too familiar for Ukrainians where the occupiers exploit their own victims only to shift the blame for killing them onto someone else.

Russian propagandists are the same war criminals as Russian soldiers and officers, or possibly worse. Semyon Pegov is one of those who must not be captured alive under any circumstances.