A story of a friend who managed to make a phone call from Mariupol, blockaded by the Russian occupational army in Ukraine.

“Every minute, the city is subject to shelling by GRADs, artillery, air bombing. It is being wiped off the face of the Earth. 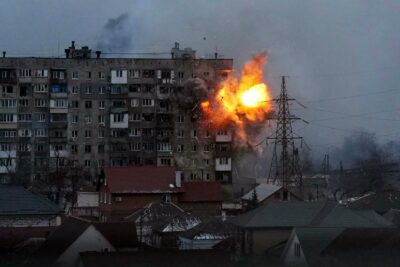 Civilian building in Mariupol shelled by the Russian invaders

Moreover, Russian aviation targets crowded places where people are forced out of the bomb shelters to cook food over an open fire—the aggressor’s bombing destroyed electricity infrastructure in the city. And there is no way to prepare food on an open fire in the basements where civilians constantly hide—they will simply suffocate there.

Just imagine the physical and psychological state of Mariupol citizens hiding in the basements for over two weeks, without water, electricity, and food.

They use buckets as toilets. Just imagine the odor there.

Those, who still have food, eat pasta raw. If they have any left, of course.

The shelling and fire never stop, and even those in despair who get out of the basement to gather some wood, find a water source, or set fire to cook a meal can and often do become an easy target for Russists (Russian fascists).

There are plenty of videos online showing how these ь monsters shoot at unarmed civilians from a tank on the streets of Mariupol, even when they have their hands up. 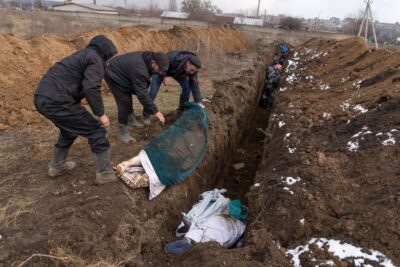 The streets are covered with corpses lying about unattended. Previously, survivors tried to cover those bodies with blankets. Nowadays, no one takes care of them in the city areas, where the street fighting is in full swing. So they simply rot and are torn to pieces by stray dogs and rats.

But things could get worse.

I am happy for those Mariupol citizens who were lucky enough to escape from this Hell on Earth and headed for Zaporizhzhya in their personal cars in the past couple of days. But the count of the lucky ones doesn’t exceed 20,000—out of 400,000 total population—and most of them are still unsafe passing through the invaded territories (in the Berdyansk region, Russian troops keep shooting directly at roads).

Today, a friend who managed to leave Mariupol yesterday and is now in Berdyansk wrote to me. There are also problems with food, although local residents do their best to help refugees and arrange accommodation for the night.

The internet or mobile network in Mariupol is practically non-existent these days; sometimes, the connection goes live for a short period here and there. To send a Text, one needs to get to the roof, which is a mortal risk due to constant shooting.

Some Mariupol residents who live near the Kalmius and Kalchik rivers use them as drinking water sources. Needless to say, these rivers are highly polluted by industrial waste from metallurgical factories.

But people simply have no choice. Earlier they could eat snow to quench their thirst, but it all melted now.

I asked a friend to check if my mother and relatives are still alive, but it is impossible to get into these city areas. Apart from being constantly shelled, most roads have been destroyed. And those that can still be ridden are covered with the debris from mines, and bombs are dangerous to ride.

The number of casualties goes up by hundreds every day and far exceeds the official statistics of the municipal police. Many of the victims are still in the ruined buildings, having met death in their apartments. It’s also hard to tell how many more are under the debris. 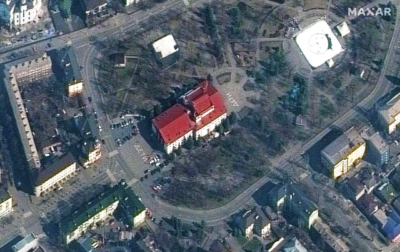 Mariupol Theater with a warning to Russian pilots: CHILDREN! Two days before it was bombed by Russia.

Today, by order of the Putler (Putin-Hitler), an air bomb was dropped on the building of the Mariupol Drama Theatre, where hundreds of children and their mothers were hiding from bombing and shelling for over two weeks. Reportedly, more than a thousand children and women have died or are dying these minutes from suffocation and wounds under the ruins of the destroyed theater building. The occupiers do not let the rescuers help the survivors—they keep shelling the area.

Putin intentionally ensures that the humanitarian aid doesn’t reach Mariupol and that the convoy with refugees does not leave the city. That is what “Diplomacy on Putin’s terms” means.

The international community is not taking sufficient action to stop this Genocide in the 21 century. Journalists can’t get there to reveal the absolute horror unfolding in Mariupol as I write those words.

Today I read that the employees of the International Red Cross have already left Mariupol.

Therefore, I appeal to all journalists, bloggers, and other indifferent people and ask them to share information about Russia’s Genocide in Mariupol, where hundreds of people die every day!

With every day passing by, the chances to evacuate the remaining citizens of Mariupol are fading. Every day there are fewer undestroyed vehicles left in the city, and there is almost no gasoline left. We ask the European, US, and Canadian governments to take decisive actions before Mariupol becomes the new Babi Yar, only this time the death toll will be much higher than during WWII in Kyiv.”

Mariupol is a city of some 400,000 residents located on the Azov seashore in the south of Ukraine.

← Pentagon: Russia has fired over 900 different types of missiles into Ukraine since the beginning of the invasion
It will take several years to demine the territory of Ukraine →