The song “O Sole mio” (in Neapolitan dialect) is probably the most famous Italian song in the world. Great singers like Frank Sinatra, Brian Adams, Elton John and Lady Gaga sang their version of the song. Pavarotti’s performance during the concert of the “Three Tenors” remained memorable. Even Elvis Presley, in 1960, created a very popular rock version: “It’s now or never”.

Actually, few people know the incredible story of the song’s birth. It was composed in 1898 by Eduardo Di Capua a musician from Naples, who was Odessa with his father, an appreciated violinist in artistic tour in the City. The composer was impressed by a suggestive dawn on the Black Sea. The words were written thereafter by the poet Giovanni Capurro. As a matter of fact, there is no reference to Naples or the Mediterranean sea in the lyrics. The legend tells us that Di Capua was inspired by his passion for a beautiful aristocratic young lady (Anna Maria Vignati-Mazza, winner of the first beauty contest of Naples).

Later, the song was candidate to a music competition in Naples, but it did not win and had to accept regretfully a second position. Anyway, its simple melody spread more and more all over the world and became an international success with the recording of the legendary tenor Enrico Caruso in 1916. Unfortunately, too late for the composer and the lyricist, who both died few years after in utter poverty. 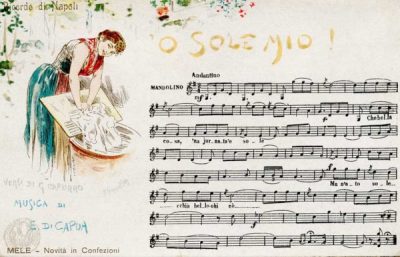 But the stories on “O’sole mio” are not finished. In 1920, during the Olympic games of Anvers, an 18-year-old Italian runner from Milan, Ugo Frigerio, won the 10 km march. When the King Albert of Belgium was rewarding the champion with the gold medal, the band performing national anthems did not find the score of the Italian one (those times it was the “Royal March”). To get out of the awkward situation the director ordered his musicians to play “O sole mio”, which they knew by heart. And immediately the audience of the stadium started to sing the song, following the band.

It looks like Odessa, founded by a Neapolitan commander (Giuseppe De Ribas), received from him the Italian soul and Odessa paid off her debt inspiring a song, which is today a pillar of the Italian identity.

← HHLA, the German operator of Container Terminal Odessa, became owner of the new logistics hub of Trieste
Ukraine is the first world producer of sunflower seeds and will increase by 7% its plantations →