In the period from December 27, 2014, to January 9, 2015, IMI registered six cases of physical aggression, threats and obstruction of journalists’ work and one case in the category «Censorship. Access to information».

The period of the New Year and Christmas holidays in Ukraine was not very joyous for some Ukrainian journalists – they faced obstruction to their professional activities – on the very eve of New Year, on December 29 there were several cases of threats and even beatings of journalists (Ternopil, Kherson, Boryslav in Lvivska oblast). 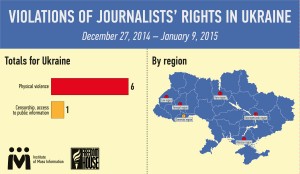 In particular, IMI registered six cases of physical aggression and obstruction to professional activities of several journalists and media outlets:

In some regions, the local authorities, as if there were no revolutionary changes in the country, keep sidetracking journalists’ requests for public information.

For instance, on January 6, the Chernivtsi newspaper «Molody Bukovynets», which sent the second request for information to Chernivtsi oblast council for copies of its deputies’ income, property and expenditure declarations, received another refusal. This time, their request was transferred to Chernivtsi oblast territorial electoral committee.

This report was prepared within the framework of the project «Network of media observers», implemented by ІМІ with support from Freedom House and the Ministry of Foreign Affairs of Norway.